First garment on my Passap Duo 80 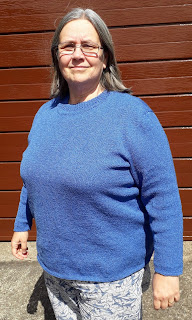 It must be over 2 years ago that I bought my Passap Duo 80 from a lady in London, and brought it home full of enthusiasm.

I cleaned it thoroughly, and knitted a lot of swatches followed by scarves and cot blankets with no real difficulties. However, I didn't manage to knit a garment. Even if I got it all going OK, it all went horribly wrong as soon as I needed to do any shaping. I dropped stitches or - even if I was sure I hadn't - they seemed to bounce off the needles. There was just so much to remember, too. I know it would have been the same when I first started with my Brother, but that's so long ago now that it's all second-nature.

The March 2020 edition of Machine Knitting Monthly contained a very straightforward jumper in crepe, with step-by-step instructions. Normally I wouldn't follow a pattern for something this straightforward, using my Knitleader instead. But I decided to have one more attempt. It worked, and I attach the evidence!

Not having to think about anything other than the action of the machine meant I could concentrate on that. I discovered a few things that will make my next attempt more straightforward.

Genuine comments are welcome, and we will respond as soon as we can. Spam is deleted immediately, so don't waste your time.