This page is now very long. No further content is being posted here. Instead, see the Home page of the site - you can filter the posts using the list of labels on the right-hand side of the page.

Our meeting on Monday 3 September 2018

A very successful evening!  We set up four machines, and there were demonstrations of different machine techniques at each of them. Club members were able to circulate to watch the demonstrations and ask questions. Demonstrated were:
Tuck and slip stitch, demonstrated by Helen. 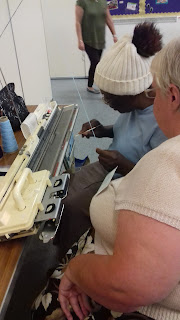 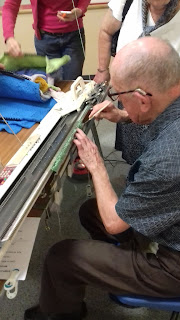 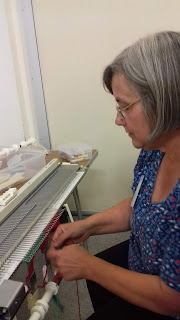 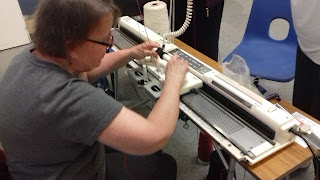 After coffee we had our usual notices and updates, show and tell and another little yarn auction led by Helen and, of course, lots of knitting and nattering 😊 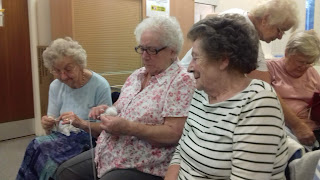 
On a warm summer evening with doors and windows thrown open to catch the breeze, Ann Matthews demonstrated a range of different and embellishing  ‘Making-up’: techniques for putting a garment together.  Techniques included a piping join, a mock cable join, a twisted join and a zig-zag join.   Anne's demonstrations are always of interest and a big thank you to her and also to her son who videoed and projected the techniques close up so everyone could see the detail.  A lively discussion followed and the meeting concluded with Helen running a brief auction of yarn cones, all proceeds going to charity.


Flo (94), an avid and accomplished machine knitter for many years, inspired us all with her beautiful  bobbin lace which she had also made over the years. 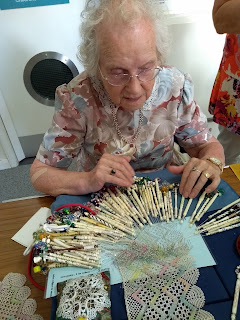 Rachael got us to try our hands at Kumihimo; great fun and very relaxing. It gave us all a new twist on cords and edgings. 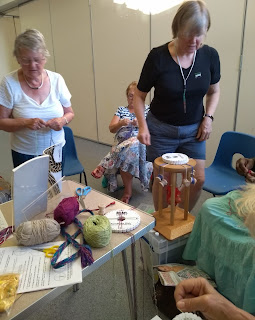 The Club's June 2018 meeting is on Monday, 4th June. We will be taking a peak at images from the recent NTU Fashion Knitwear Design Graduation Cat Walk Show and we will have the Club machine out to explore different combinations of yarn, colour and stitches.
Meeting starts at the usual time 6.45p.m and will close at 9.00p.m. Killisick Community Centre, Killisick Rd., Arnold. NG5 8DB 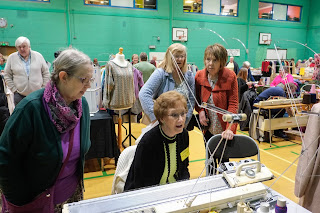 Exhausting but so enjoyable; after an absence the previous year the club had a stand at the Nottingham Machine Knitting Show held annually at West park, Long Eaton.  Many club members provided exhibits from their wardrobe to celebrate thirty two years of the club. They also  came along to support the stand and no one left before buying some extra kit or yarn which was on display in abundance.

During the day we met many knitters from clubs around the country and potential new members for the club, some of whom we were so happy to see again the next evening at our April meeting which also happened to be at our AGM.


Luckily there was also time for the second part of Sue Booths talk about Knitting Lace on the Machine.

Sue Booth treated us to a double demonstration featuring some handy tips on Intarsia  knitting and the first part of her talk about Lace knitting on the Brother machine which will be continued after the AGM at the next meeting on April 9th. Many thanks to Sue and Andrew for projecting the action. 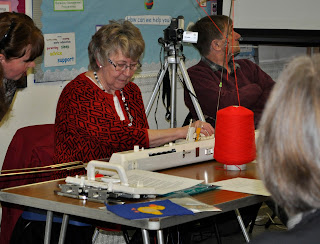 The February meeting featured a great demonstration by Ann Matthews, aided and abetted by Andrew. Ann shared her skills for steaming completed pieces of knitting to the exact shape and size to give the perfect finish her garments always show. Members all got a first class view as Ann’s son Andrew was kind enough to project all the action on screen. 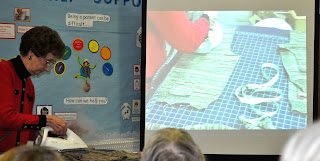 After a quick round of “show and tell”, of members latest creations, time was also given to organizing for the Nottingham Machine Knitting Show on Sunday April 8th. 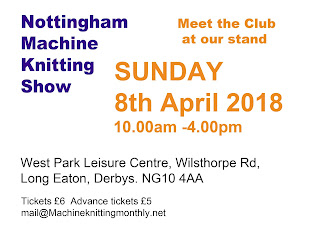 We were inspired after a visit from the Nottingham Hospice to knit for charity, and we decided on the concept of a hamper, containing a selection of hand and machine knitted goods that could be sold by a charity. The idea is that the hamper is taken to an event of some sort, the contents are sold, with the money taken being kept by the charity. The hamper is then returned to the knitting club for replenishment, ready for sending to the next event.

Thank you to everyone who knitted – especially Jean Conduit, who has provided a range of hats and scarves – and to Priscilla Morley, for organising it all. I’m sure you’ll agree that it looks very inviting. 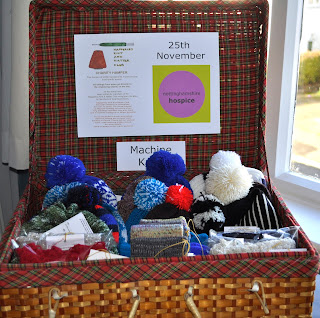 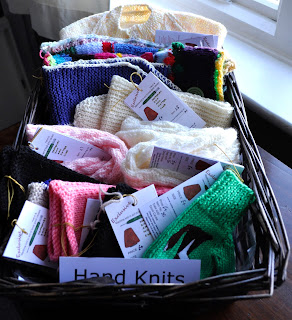 This evening's meeting was spent looking at colour - what suits us and what doesn't. Many of us acknowledged that we forgot sometimes that we're getting older and automatically reach for the colours we used to wear a few years ago. Very thought provoking.
Sue Booth kindly volunteered to be the guinea pig for the meeting, and Pat Collins tried various colours to see which suited her best.

Sue, as always, delivered a very good demonstration. An added bonus this time was that Andrew Matthews very kindly set up a camera and projector so we could see much more easily what was going on. As is always the case when people know Sue is delivering a workshop, the club was buzzing.
We're always grateful for Sue's workshop, but this time she got an extra 'thank you'. Priscilla had been busy baking, and presented Sue with two cakes, one for eating during the meeting and one to take home. Thank you, Priscilla!


More news from the Guild Day and AGM

Many congratulations to Sue Booth, who was awarded the Chairman's Cup in recognition of her unstinting promotion of the craft of machine knitting, and all the help she has given those struggling with some aspect or another. (This couldn't be announced at the July meeting as Sue was being presented with the award after the meeting had happened.)

We're very lucky to have Sue as a club member. Thank you from all of us for the help you give us.

We have heard through the Guild of Machine Knitters that Wonderwool Wales 2018 wants to create a "Curtain of Poppies" to mark the centenary of the end of World War 1. Their aim is to have 887, 858 poppies, one for each person from the UK who died during that conflict.

The poppies need to be 6cm in diameter, and the link to Wonderwool Wales above gives hand-knitting and crochet patterns.

Sue Booth has kindly produced a poppies pattern that we can use to knit them on the machine, and has given permission for it to be made available here:


During the meeting, Sue mentioned that you may have to set your MT to 6 to get the required size.

As promised in June, this month we had a variety of machines for people to look at: a Brother punchcard machine, a Brother electronic, and a Knitmaster chunky.

The electronic proved to be relatively popular, and a number of people had a brief overview of its capabilities, and the opportunity to try out the machine to see how easy (or difficult, depending on your perspective) it is to use.

The session this month finished with a discussion around the idea of a charity hamper, as we have a lot of donated yarn that must be used for charitable purposes (either swapped for a donation to charity or used to knit for charity.

The idea is to knit basic items (scarves, hats, gloves, and so on) using either yarn from our own stashes or the charity yarn, to price the items and put them in a hamper. The hamper is then given to a nominated charity for a predetermined period of time for them to sell the contents. When the time period is up, the hamper (and any unsold items) are returned, the hamper is replenished and the process repeated.

News from the Guild Day and AGM

Our own Ann Matthews won a prize (the members' choice) in the Guild Challenge this year for a woven jacket in autumn colours. Congratulations, Ann!

This was a relatively quiet club night, starting with the customary 'show and tell' of items people had made recently.

After that, people broke into small groups to discuss their knitting. Many had brought something with them to do, either sewing up of something they had machine.

We got the club machine out (a Brother punchard machine) with the intention of reproducing the crochet-look stitch that Clair had tried to show us the previous month, but there had been a slight error in the instructions. Unfortunately, although we had updated instructions, no-one had the punchcard pattern with them. However, some new members were happy to be shown some basic steps on the machine, such as casting on and the different stitch types (tuck, slip, lace, etc.)

As a hands-on session was so popular, we arranged to have a variety of machines available during the next meeting.

Clair Crowston was guest speaker at the May meeting of the Mapperley Knit and Natter Club for machine knitters. After demonstrating how to knit both sides of a plain V neck simultaneously, Clair showed how you can create a crochet look using a punch card and lace carriage. She also made a unique tuck stitch cuff using a Knitmaster card on her Brother machine. Clair finished the session with some three colour work in slip stitch.

Thank you to Pat and Janet

Our new Club Chair, Helen Flarry, presented gift tokens to Janet Jackson and Pat Collins to thank them for their sterling work for the Club. Janet has acted as club treasurer over many years; Pat has been club secretary for several years and in recent times has acted as both secretary and Chairperson. Their dedication to keeping the Club going is much appreciated by all members.


Knitting for the hospice

Club members have been busy knitting in response to the appeal by Nottinghamshire Hospice. Speakers from the Hospice came to the April Meeting and told the group about the work done there and in the Community for those in the final stages of their life and their families.
The need to raise at least £7,000 a day is being given a boost by holding a “Big Purple Party” consisting of fund raising events during the week 22nd-28th May. The club was asked to support their Yarn Bombing efforts in purple and white yarn which will be used to publicise the Hospice during the party week. The first fruits of club member’s efforts were displayed at this month‘s meeting.

The Club was also very happy to receive a thank you note from the Hospice for the donation of £125 from the Club charity fund which was presented to them at the April meeting.

The Nottingham Machine Knitting show took place at West Park Leisure Centre, Long Eaton on Sunday 9th April.
There was a lot to see - yarn (of course), patterns, machines/spares and accessories - and some very interesting talks.
Some members of the Mapperley Knit and Natter club were there, and Ann Matthews did a great job demonstrating on a machine set up next to the stand belonging to the Guild of Machine Knitters.
Ann gave both hands on experience to some wishing to try machine knitting for the very first time and demonstrated some really striking hand-manipulated designs.