As we cannot meet during the CoVid19 crisis, we're sharing the fruits of our machine knitting efforts online.

While the pandemic is forcing us all to stay at home, it's the perfect opportunity to progress your knitting.

Good, bad or ugly, send your pics to mappknitnatter@gmail.com (or to Alison) and we will post them here so we can continue to enjoy our craft together.
Posted by Mapperley Knit and Natter Club at 08:33 2 comments:

I’ve still not knitted an actual garment on a knitting machine, but I have bought another machine.

I bought a complete heap of a Brother 710. After much scrubbing I managed to knit a few rows, but it was still misbehaving. I took it to bits a bit further, and have now got the push buttons working properly - it was selecting the needles almost randomly. There was a screw out of place in the module of the pattern selecting which was a pig to remove and almost as bad to replace.

The machine was sold as almost a pile of parts ,but I have sourced most things I needed for it, but I still need a couple of bits. I need a top cover/lid for it as the one it came with was for a KH864. If anyone needs a lid for a KH864 they are welcome to it.

I would also like to source a ribber for the 710 as I have the connector carriage thingy, some ribber weights and the screws to attach the ribber. If anyone has any 710 bits they would like to sell I would be interested. Here are a couple of photos of the state it was in and the fluff that came out of it ! 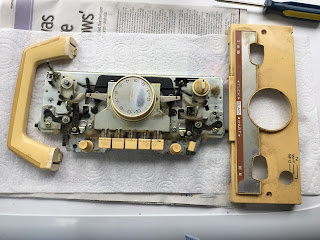 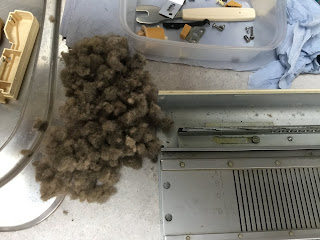 Jean has sent in two photos:

Hope to see you all soon!

Posted by Mapperley Knit and Natter Club at 12:52 No comments:

Veronica has knitted a 'special' cardigan for her granddaughter

Veronica has sent us this: 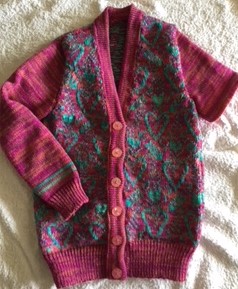 My granddaughter broke her arm a couple of weeks ago and as the weather has turn chill, I adapted a cardigan I was knitting for her to suit her present problem with one short wide sleeve.

I used a Marion Nelson pattern and a punchcard I found in my stash. The yarn is 2/30s acrylic also in my stash. I like the turquoise mix which has ‘bright’ acrylic giving it a sheen.

The body is a bit long, it’ll keep her kidneys warm. It’s difficult to get a proper fitting at present with not seeing her as much and then not been able to get close enough to measure the bits I need. Of course I didn’t do a tension square.

Hi everyone - I hope you're all keeping well. 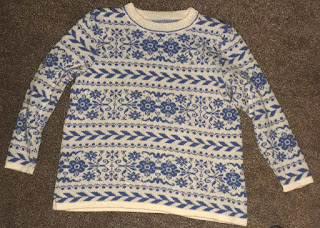 I've been rediscovering my double-bed colour changer, and have finally knitted up the Yeoman yarn (3ply, 50% wool/50% acrylic) I bought at the Nottingham Show not last year but the year before.
I originally bought two cones of the blue and one of the white - and used one of the blue fairly quickly to knit a tuck stitch jumper for myself. I now longer have that... my husband put it in the machine, after which it fitted my slim daughter-in-law, and my son then did the same. It wouldn't even fit a 5-year-old and was like cardboard!
I've used the blue and white (it is white, although the photo doesn't look it) to do this double-jacquard jumper for myself in readiness for the cooler weather in the autumn. It's one of the standard Stitch World patterns, and I thought it worked well with the blue and white. A bit of a Wedgewood feel. 😊
I've got a Brother KH965 but a KR830 ribber (which I originally had with my KH836). Last year, I bought a ribber carriage for a KR850, giving me the option to do the birds-eye jacquard. It fits nicely, although the connection between the ribber and the main bed was a little weak (the connecting arm didn't fit all the way into the slot). I've now got the ribber part for the main carriage too, so that is better. There was still a little bit of adjustment needed, as it kept missing the yarn when I changed colour. Comparing it with the older carriage, the angles weren't quite right so a bit of push into place was needed.
The only thing I've noticed that is a little odd is when you're decreasing. You have to make sure that you (ideally) decrease on an even row number (every 2nd, 4th, 6th) as every other needle knits in each direction on the ribber. If you decrease on an odd numbered row too frequently, the same needles keep knitting and the same needles slipping. I have some areas on inside where you can see the effect of the decreases - instead of birds-eye, I've got stripes for a few rows.
Now I've done this - and I've got the red yarn - I can knit my grandson's jumper. The tension square is done and the pattern is in the machine. Thank you to Pat and to Pauline, who both contacted me to say they had some red. Pauline had the 2/30 acrylic I was looking for, so I will return Pat's to her soon. Again, than you both.
Posted by Alison Peck at 08:01 No comments:

Show and Tell from Jean Conduit

Jean has sent us photos of the lovely things she has been making for the Show & Tell. (Apologies, I didn't get chance to upload this yesterday.)
Jean says:

Hope to see you all soon.

Posted by Mapperley Knit and Natter Club at 07:58 No comments:

News from other clubs...

Some of the other machine knitting clubs around the UK are putting even more online than they usually do.

For an interesting read, take a look at Fleet Knitting Club - ex-GMK members will know of Liz Holness, who was our Chairman for many years.

If I find any others with recent updates, I'll let you know.
Posted by Alison Peck at 12:35 No comments:

Linda has finished a couple of jumpers... 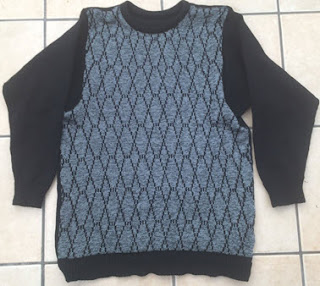 Well I’ve finally finished my husband's jumper and I have also made a jumper for my grandson.

I have been busy setting up a second machine (my mum's knit master 323) it’s a lovely machine but so different to the Brother, such fun. I’m going to use the punch card patterns for my next project, I’m so excited.

I miss you all and can’t wait till we can meet again. 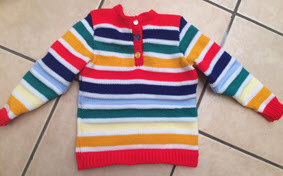 Till then I am sending a virtual hug.

Stay safe and see you soon.

Linda
Posted by Mapperley Knit and Natter Club at 07:54 No comments:

Pat sent us a photo of her latest creations, and said:


I have knitted two cushions inspired by Bill King’s article in last month’s Machine Knitting Monthly. Punching out the card nearly drove me mad but I am pleased with the result. I’m going to try more colours next. 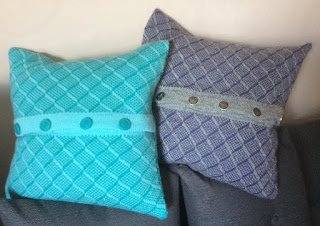 Pat has been knitting hats...

Pat has sent us the following: 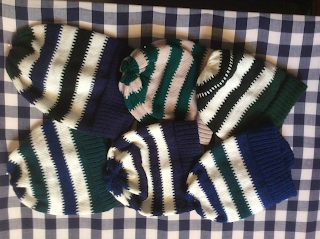 My mission during lockdown is to use up as many oddments as possible so, small amounts will make striped hats! Herewith the first six. Having raided the blue and green box I am now heading for the reds and pinks.
Posted by Mapperley Knit and Natter Club at 18:38 No comments: